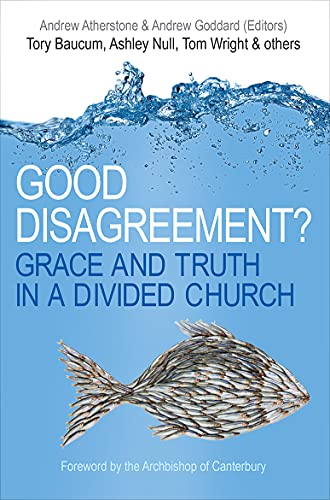 This is the first of a number of planned reviews and critical engagements with this book.

The three outstanding contributions which will ensure that this symposium is studied around Anglican churches worldwide for some time are the New Testament studies by foremost scholars, Tom Wright, Michael Thompson and Ian Paul.

In an outstanding article, Tom Wright makes it very clear that Paul worked hard for unity in the gospel in churches which included people divided by gender, race, social class and cultures. A number of matters were secondary to this overriding concern to express reconciliation and harmony between these divided groups of humanity. But these did not include diversity in matters of sex and marriage. Some behaviours “ belonged to the dehumanising anti-creation world of sin and death which could not be maintained in the reconciled family of the new creation.” ( p. 70).

Ian Paul argues that reconciliation between people is a necessary part of living out the gospel but is not sufficient unless it is attached to and springs from reconciliation to God in the gospel. ( p. 40).

Michael Thompson studies division and discipline in the New Testament church and concludes that false teachers lead people into serious error away from the true liberation of following Jesus. The church is told to avoid them and if necessary drive the unrepentant away. However, every case of discipline in the New Testament concerns the failings of individuals who profess the faith. There are no examples of apostles excluding entire congregations. Biblical discipline excludes in order to protect and aims to restore. It is dangerous to allow spiritual cancer to spread instead of confronting a threat to the entire community. ( p. 60).

Other helpful discussions of disagreement argue for disagreement that is respectful and well-mannered. Stephen Ruttle outlines processes which can help this to take place, distinguishing mediation from arbitration which involves judgement.

The two Andrews are to be warmly thanked for gathering these contributions into one cover which clarify that good disagreement does not mean compromising on deeply held convictions, nor entering a neutral space where all opinions are relativized to be of equal value. Those who have reported on the facilitated conversations on the EGGS website and who hold to orthodox teaching and practice, have reported feeling uncomfortable that ‘heterodox’ views are accorded equal weight in a so called “Christian’ conversation. As a result the implication that they are being divisive and homophobic in rejecting them hangs heavy in the air.

An ‘orthodox’ space of examining the implications of the biblical and Church of England teaching as it stands would allow for sharing of experience and concerns by those with same-sex attraction, in order to elicit better understanding but on the grounds that such are pastoral challenges to be met with support, care, repentance where appropriate, and amendment of life where possible.

Canon Dr Chris Sugden was a founder director of the Oxford Centre for Mission Studies and then Executive Secretary of Anglican Mainstream of which he is now convenor of the trustees. He works with the Oxford Centre for Religion and Public Life on matters of Public Ethical Debate and is a columnist for Evangelicals Now. Chris and his wife Elaine, a cancer doctor, worked in India for 6 years, and have three married children and seven grandchildren.