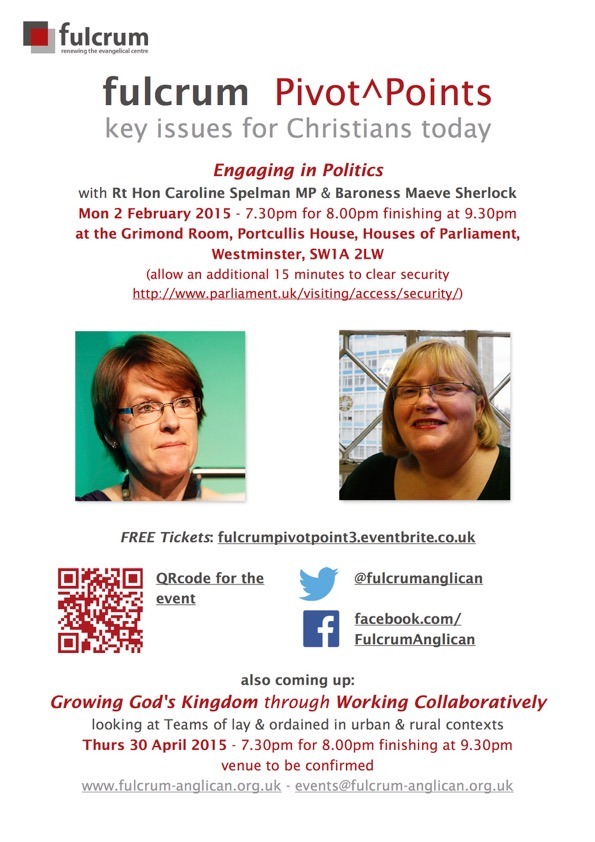 [This event took place in Feb 2015, ahead of the General election. You can find Baroness Sherlock's address here, and Caroline Spelman's here.]

With the election fast approaching Fulcrum is delighted to welcome two high profile Christian politicians to discuss the role the Church and individual believers should have in engaging in politics...

Fulcrum's new series of events - Pivot^Points - aims to get the conversation going about the role of the Church in contemporary Britain. This series will look at a wide variety of topics, but will always revolve around that core theme.

The third event in our series involves two high profile speakers debating the issue that will dominate the news agenda over the coming months - the General Election. With the polls close, the emergence of UKIP and the Greens and the electorate having the chance to give its verdict on the UK's first coalition government in 70 years, the 2015 election promises to be fascinating. But how should Christians be engaging? What can we bring to the table that's distinctive? What more can we offer to the process than simply turning up to vote in May? And how should we get involved in the campaigns?

The Baroness Sherlock OBE is Labour Spokesperson for Work and Pensions, an Opposition Whip and member of the House of Lords since 2010. She has had varied career before entering frontline politics. Having been President of the National Union Of Students in the 80s, she went on to be the Chief Executive of the National Council for One Parent Families and then the British Refugee Council. She is an Honourary Fellow of St Chad's College, Durham and studying for a doctorate herself. She's an active member of her church.

The Rt Hon Caroline Spelman MP is the Conservative Member of Parliament for Meriden - a seat she has held since 1997 - most recently with a majority of 16,000. She has held a number of high-profile jobs notably serving in the Cabinet as Secretary of State for the Environment, Communities Secretary, and as Chair of the Conservative Party. She has campaigned against human trafficking, has a keen interest in International Development and is a member of the Ecclesiastical Committee - making her ideally placed to assess the interaction between Church and State.

The Rt Revd Dr Graham Kings is the Bishop of Sherborne and the Theological Secretary of Fulcrum.

There will be time for open discussion. Come and join in by booking here.

Monday, 2 February 2015, 7:30 for 8pm (Please allow time to come through security checks).
Tickets are free (but booking is essential); there will be refreshments and a retiring collection to cover expenses.

Andy’s a writer and broadcaster and works for the Centre for Theology and Community in London’s East End.