I would like to thank the organizers for inviting me to share with you my experiences and stories of the Anglican Communion on this occasion of the 15th anniversary of Fulcrum.

I was given the topic ‘Global Mission’. As it is such a wide and open-ended topic, I thought I should share stories and experiences from the Anglican Communion. I have entitled my topic:  Global Mission: Examples from the Anglican Communion. I will try to do this within the few minutes that I have, remembering that saying that "in Africa, we have the time, in the West you have watches".

I will be start by looking at the Anglican Communion, its shape and growth. This will be followed by the Mission Manifesto of Jesus at Nazareth. I will then discuss and share examples of a missional approach known as the Church and Community Mobilization Process. I will conclude by looking at Five Anglican Mission Initiatives.

1. The Anglican Communion: Shape and Growth

The Anglican Communion is a communion of 39, soon to be 40, autonomous provinces in over 165 countries. It is held together by a shared heritage, by ways of worshiping and by the relationships between its members worldwide. One key point is that member churches of the Anglican Communion are all in Communion with the See of Canterbury. The Archbishop of Canterbury is one of the four instruments of the Communion; he is the focus of unity. The other instruments of the Communion are the Anglican Consultative Council (ACC), The Primates’ Meeting and the Lambeth Conference.

Growth of the Church

Anglican churches are growing faster in many parts of the Global South. I would like to share with you a few stories of the growth of the Anglican Communion:

The Way of Anglicanism

When Anglicans gather in their regular Sunday worship, they do so not just to hear the Scriptures together, but also to worship God. For centuries Anglicans worshiped God in the same words using the Book of Common Prayer, and, telling time in the same way (Advent, Christmas, Lent, Easter, etc.). This is one of the unique features of the Anglican Communion in that wherever you go, regardless of the language, you can almost follow the service because of the common use of the Book of Common Prayer.  I was in Portugal in May and I knew exactly where we were in the liturgy and could follow and join in where I could remember the prayer from memory.

One of the greatest mission statements of all time is from the Anglican Consultative Council’s “Five Marks of Mission”.  These are:

The Five Marks of mission follows Jesus Christ’s teaching in in Luke 4:18.

2. Mission Manifesto of Jesus at Nazareth

He went to Nazareth, where he had been brought up, and on the Sabbath day he went into the synagogue, as was his custom. He stood up to read, 17 and the scroll of the prophet Isaiah was handed to him. Unrolling it, he found the place where it is written: 18 “The Spirit of the Lord is on me, because he has anointed me to proclaim good news to the poor. He has sent me to proclaim freedom for the prisoners and recovery of sight for the blind, to set the oppressed free,19 to proclaim the year of the Lord’s favor.” 20 Then he rolled up the scroll, gave it back to the attendant and sat down. The eyes of everyone in the synagogue were fastened on him.

If you were a newspaper editor, how would you report the above story? What would your headline be? Here are a few possible headlines

The above passage is referred to as the Nazareth Manifesto. A manifesto is a “public declaration of policy and aims, especially one issued before an election by a political party or candidate”. A manifesto is like a vision. Jesus had a vision or a manifesto. All of us have to clearly understand what our vision and mission is in order to make the right contribution towards such. The Bible says that without a vision people perish (Prov.29: 18).

Luke 4:18ff is saying that Jesus’ ministry was not only aimed at the spiritual need, but both physical and spiritual. Missionaries in various parts of Africa did three things namely Church planting (evangelism), schools (education) and hospitals (health care). He met the needs of the total person - body, mind and soul.

Anglican churches continue to do this in many parts of the world. The number of people who go to Anglican run schools, colleges and universities must be in millions. Other programmes include among other things:

I would like to return to the Church and Community Mobilisation Process (CCMP). It is one of the best illustrations of holistic ministry that I am aware of. I will now share examples of CCMP programmes from South Sudan and the Council of Anglican Provinces of Africa (CAPA).

I first came across CCMP when I was working for an organisation called Across from 1996 to 2007. When I was elected bishop of the Diocese of Kajo-Keji, I was determined to use CCMP.

CCMP hinges on the Word of God. Participants go through a series of Bible Studies led by a facilitator. The result is that many of the participants are transformed by the Word of God to realise their potential and change their views on how they can alleviate poverty. Additionally, the vast available resources in their midst when harnessed faithfully and responsibly enables them to secure their desired future.

As they make changes in their lives, and in the church, they would also think of their communities.

CCMP aims at making the church become the centre of holistic development where discussions about issues that affect the community are discussed and local solutions found.

When I was a diocesan bishop of Kajo-Keji, one of the exciting things for me was to go into a parish and hear exciting stories of transformation that had occurred in the lives of people. Here are a few examples:

The Council of Anglican Provinces of Africa (CAPA) has also taken CCMP known as Umoja in Kiswahili and used this approach. The Umoja model was adopted at the All Africa Bishops Conference. CAPA is training facilitators in rolling out the strategy in the selected provinces in Africa.

I am aware of excellent CCMP programmes in Kenya and also in Tanzania. The Mothers’ Union in Tanzania is undertaking CCMP in a number of Dioceses in the province of Tanzania.

I would like to look at a few examples of Anglican initiatives in mission.

In many parts of the Anglican Communion, churches have continued to do the same, meeting the physical and spiritual needs of the people. Anglicans have also understood that every baptised (and confirmed) person has a ministry to perform within the Church, the community and the family. None is better, or higher or lower, just different. This is why at ACC-16 held in Lusaka, Zambia, one of the resolutions passed was to encourage “intentional discipleship”. The resolution asked, “every province, diocese and parish in the Anglican Communion to adopt a clear focus on intentional discipleship and to produce resources to equip and enable the whole church to be effective in making new disciples of Jesus Christ” and that we should all commit ourselves to “a Season of Intentional Discipleship”.

One other way we meet the physical needs of people is the ministry of the Anglican Alliance. The Anglican Alliance brings together Anglican expertise and capacity from around world to engage in relief, development and advocacy, often with global ecumenical partners and non-governmental organisations (NGOs).

The Anglican Communion Representation at the United Nations in both Geneva and New York enables better relationships and more effective communication between the provinces and dioceses of the Communion and their UN partners, especially as they respond to situations of human suffering. This is one important way of meeting the physical needs of the people.

Prayer is an important aspect of Anglicanism. In 2016, the Archbishops of Canterbury and York invited Cathedrals, parishes, chaplaincies and every Christian across England to join a great wave of prayer between Ascension and Pentecost. These assigned ten days of prayer were called ‘Thy Kingdom Come’ and the focus of the prayer was simple: to pray for the empowering of the Holy Spirit for the effective proclamation of the gospel of Jesus Christ.

The impact of Thy Kingdom Come is like the Alpha course, which was started at Holy Trinity, Brompton in London and has now spread to many parts of the world, not only within the Anglican Church but also across many denominations.

From what I have shared, we see that churches of the Anglican Communion across the globe are doing this in every church at local level in each context as they meet the physical and spiritual needs of the people. They are “scratching where it is itching”

I call upon Fulcrum and others to publicize many of these wonderful stories for us to get toknow each other better and pray for each so that God is given glory for what is being done, other than all the time sharing negative stories.

May God help us in undertaking the Nazareth Manifesto in our daily lives. Whatever we do as Anglicans should be “built on the foundation of the apostles and prophets, with Christ Jesus himself as the chief cornerstone” as we read in Ephesians 2:20. Remembering the words of the song:

In all I say and do;

That the world may see

Christ lives in me,

And learn to love Him too. 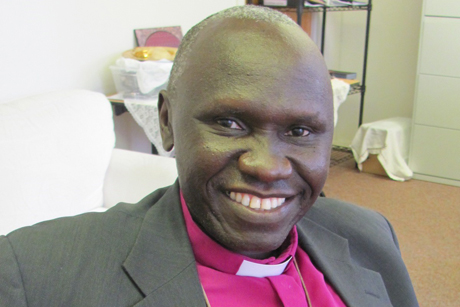 Bishop Anthony Poggo is the Archbishop of Canterbury’s Adviser for Anglican Communion Affairs and the former Bishop of Kajo-Keji, South Sudan.